For the first time in the history of music memorabilia auctions, a lock of Michael Jackson’s hair goes under the hammer!
The lock of hair is from Neverland Ranch, collected by a maid while cleaning Jackson’s private bathroom in 1990. The value is estimated at $10,000-20,000 but it could easily fetch as much as $100,000.

Other highlights of the auction include the pop legend’s signature fedoras and his signed moonwalking shoes (estimate: $8,000 – $10,000). Among several platinum and gold record awards, Michael Jackson’s World Music Awards prize will also be auctioned, which he received in Monaco in 1993 (estimate: $20,000 – $40,000). The auction also features two pieces of his jacket thrown into the audience at the 2006 World Music Awards ceremony (estimate: $2,000 – $3,000), which was subsequently ripped apart by fans.

Another highlight of the auction is one of Michael Jackson’s gloves decorated with Swarovski crystals that he wore on stage during one of his tours. (estimate: $50,000 – $60,000)
The auction also includes rare vinyl records from the Beatles as well as awards of the Fab Four and memorabilia from Elton John and Elvis Presley, King of Rock ‘n’ Roll.

Knaisz Auction House, based in London, has been auctioning music memorabilia exclusively online since 2013. At a recent auction, Michael Jackson’s Swarovski crystal-studded socks worn in his ‘We are the world’ music video sold for $120,000, while a half pair of gloves worn on stage at the Victory tournament fetched $140,000. 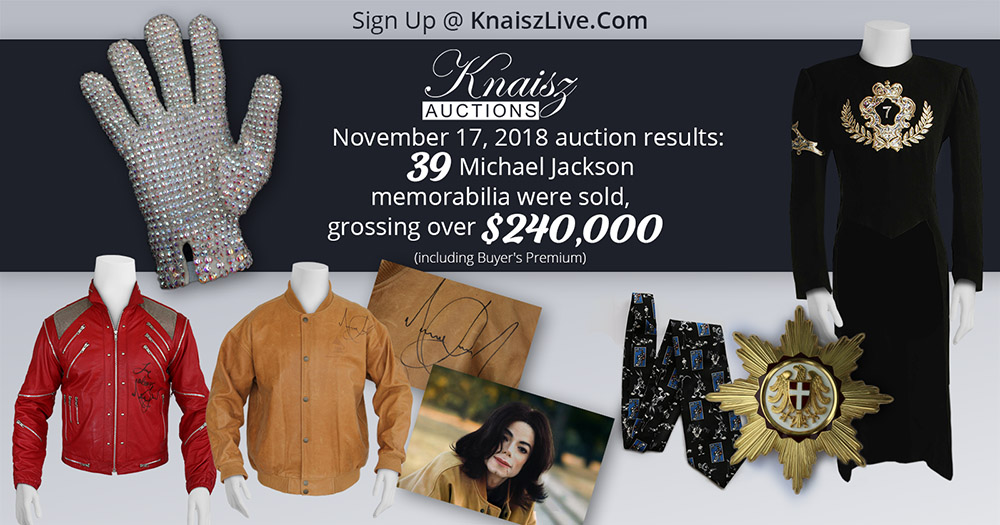 The sale features stage worn items such as his black fedora hat (Estimate: $3,000-5,000), personally owned items, including a golden medal, worn by Jackson on his outfit for one of his court appearances at the Santa Barbara County Courthouse on February 28, 2005 (Estimate: $5,000-7,000) and a bomber style jacket, Jackson wore during a photoshoot with photographer Jonathan Exley (Estimate: $8,000-10,000). One of his stage worn single glove fully covered by Swarovski crystals, worn during the 90s will be presented at auction and is conservatively estimated at $50,000 to $70,000.
The sale also includes a particularly strong section of Michael Jackson signatures, among them a red leather “Beat It” style jacket, signed and inscribed at left breast in black felt tip pen by the King of Pop (Estimate: $5,000-7,000) and a copy of LIFE magazine signed by Jackson in black ink. The cover of the December 1997 magazine features a photograph by Harry Benson that shows Jackson with his son, Prince Michael Joseph Jackson Jr., as an infant (Estimate: $1,500-2,000).
If you use images from our site or collections, we ask that you credit us as the source. Knaisz Auctions press photos may only be used for editorial/media purposes. All copyrights belong to Knaisz Auctions.
To download full size press images: right click + save LINK as…

Knaisz Auctions is proud to present an online-only auction of sixty Michael Jackson memorabilia in honor of the King of Pop’s Diamond Jubilee. 60 years – 60 items. Michael Jackson would have celebrated his 60th birthday on August 29th, 2018. Jackson was not just the King of Pop, the singer was also known for his signature style. 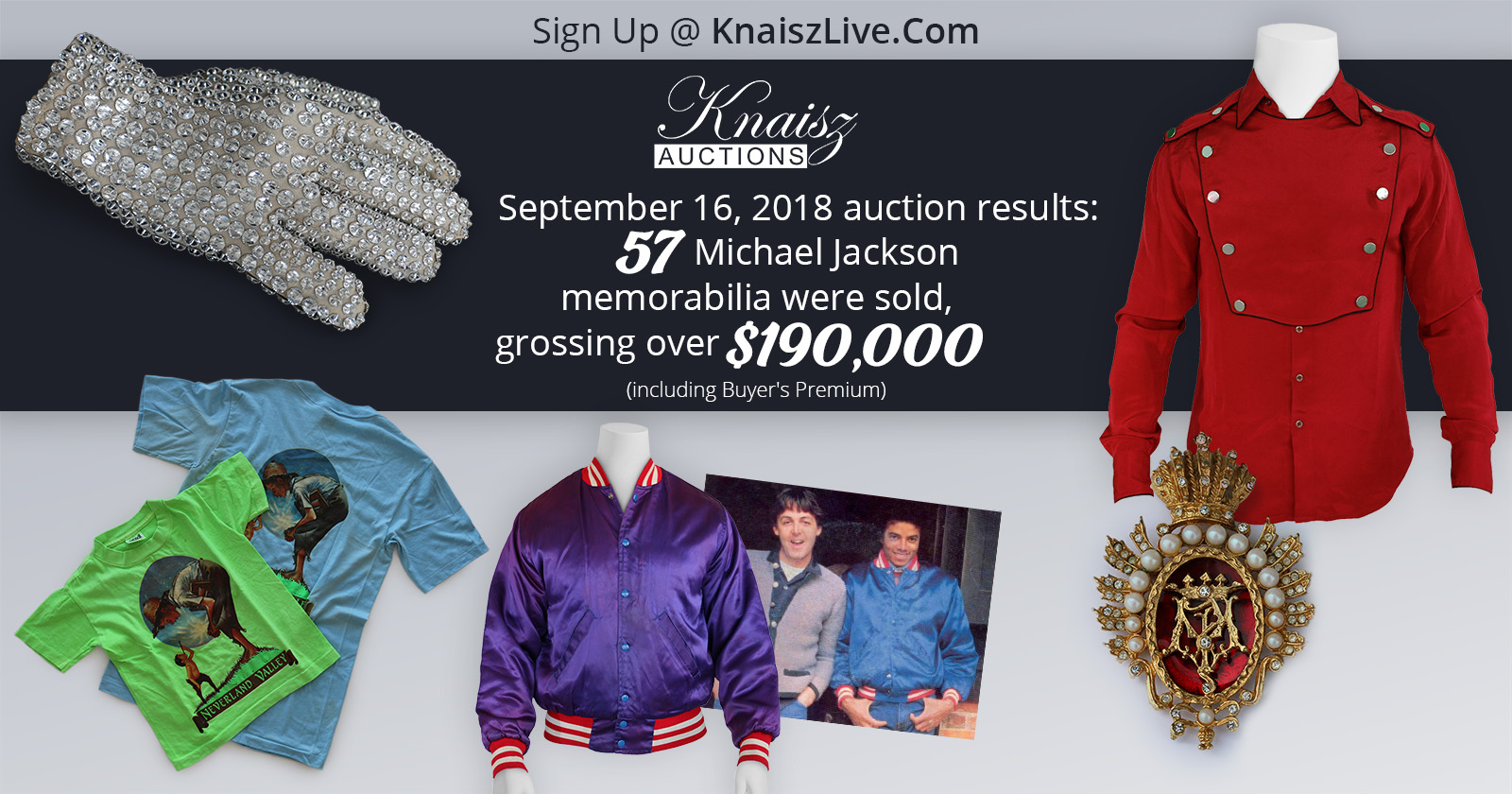 The selection of the items is intended to cover the whole life of Michael Jackson. The sale features more than 20 personally worn items from the life and career of the King of Pop, such as his purple bomber style jacket Jackson wore on the cover of his single ‘The girl is mine’ (Estimate: $4,000-5,000), two-piece black silk pajama ensemble, worn by Michael Jackson in a photoshoot for a magazine, and a white Calvin Klein dress shirt accompanied by three military badge worn by Jackson for one of his court appearances in 2005.
This sale also includes stage worn clothing such as his black and white fedoras (Estimate: $3,000-5,000), his futuristic helmet worn on the HIStory World Tour 1996-1997 (Estimate: $20,000-22,000), and his black sequined jacket worn on the Victory Tour (Estimate: $20,000-25,000) along with his right-handed single glove covered with Swarovski crystals (Estimate: $100,000-120,000).
This style of the crystal glove is one of the most recognized pieces of wardrobe in the history of popular culture. Michael appears in countless photographs with one hand bare and one hand waving the sparkling glove. The style and design specifications of “The” glove have varied slightly during the course of his career. This glove was commissioned for the Jackson’s 1984 Victory tour where Michael performed in fifty-five concerts with his brothers.
For those who prefer autographes, we are proud to present an assemblage of signed memorabilia.
Anything related to Michael Jackson is extraordinary, and to have something so incredibly historical as his clothes, gloves or fedoras are beyond special. Michael Jackson is one of the most important figures in the history of pop-music. His legacy, his extravagant garments are must-see pieces in every leading art and design museum and today more and more hotels and restaurants have been decorated by pop-culture memorabilia. We think this auction could be a great tribute to the King of Pop.
If you use images from our site or collections, we ask that you credit us as the source. Knaisz Auctions press photos may only be used for editorial/media purposes. All copyrights belong to Knaisz Auctions.
To download full size press images: right click + save LINK as…